I've gone from being a shell/make/rcs guy to quite liking IDEs, or at least useful IDEs. I find NetBeans to be a pretty nice, light-weight (in the good sense) IDE, but it has some issues on Ubuntu and other properly secured OSs. Here's how I've got it to work. This applies to NetBeans 6.1 and 6.5, I believe.

First, you have to set up your Ruby platforms so they keep their gems in writable directories. Go to Tools-> Ruby Platforms. On NetBeans 6.5 (at least), the jRuby gems are in a writable, per user path by default. If you click on the "Autodetect Platforms" button and get the native Ruby platform, change the "Gem Home:" and "Gem Path:" directories to somewhere writable, like /home/reid/ruby/gems/1.8.

While you're here, make sure the version of /usr/bin/gem is 1.3.1 or higher. If it isn't, I think you have to upgrade from a shell. I did that upgrade a while ago, so I don't remember how to do it, but you can find out easily through Google. (Ubuntu users may want to look here.) 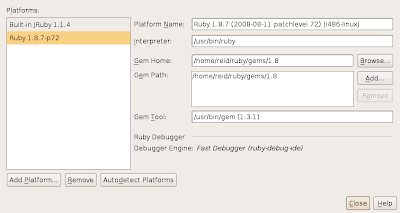 Now go re-install all the gems you need through Tools-> Ruby Gems.

At this point, you still may not be able to install plugins. You'll get the following message: "Missing the Rails 2.2.2 gem" (or whatever version NetBeans installed for you). Rake from within NetBeans seems to look at the system rails executable, and not the one installed through the NetBeans' own gem installer. But the environment.rb generated for a new application does use the version of Rails installed by NetBeans. What I did (yuck, because there's some redundancy here) is manually install the appropriate Rails version: I'm sure there's a better way, but I can't think of it right now and I really want to write some Rails code instead of fighting with NetBeans.